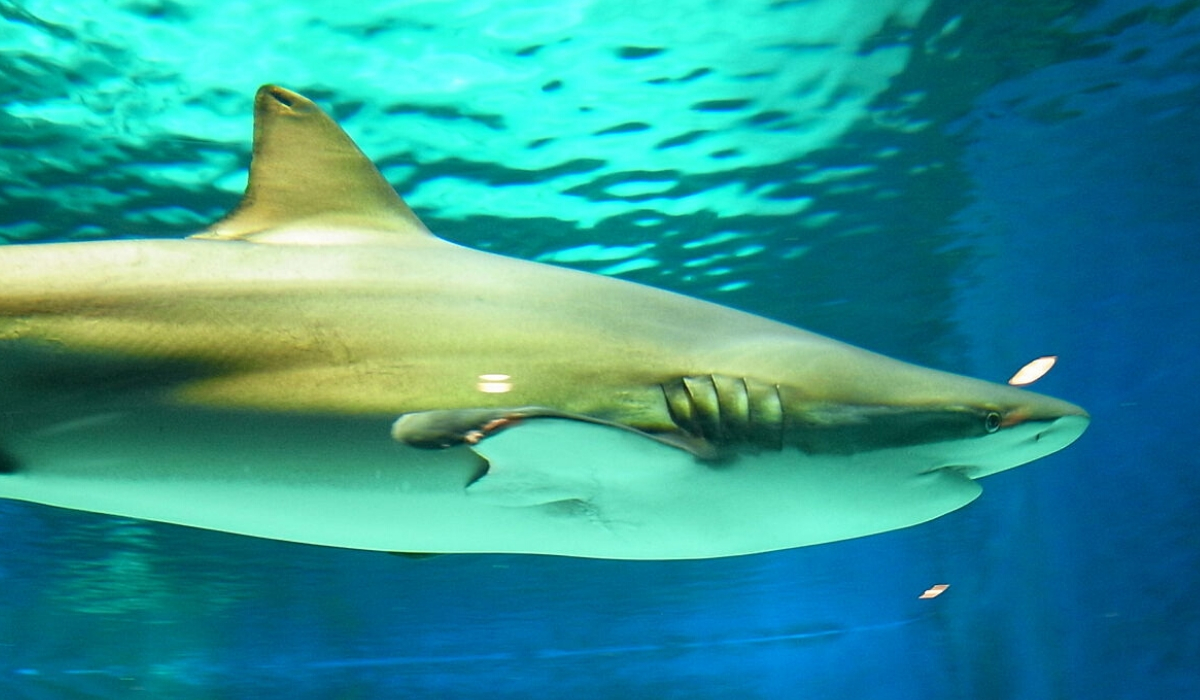 This shark gets its name from its bronzy-grey to olive-green coloring. It is the only species of requiem shark in the genus Carcharhinus that lives in temperate rather than tropical waters. They occur throughout the world but the distribution is patchy, with what appear to be regionally isolated populations that have little exchange between them (Compagno et al. 2005).

Other common names include:

According to the International Shark Attack File, the bronze whaler shark has been implicated in fifteen attacks since 1962, one of which resulted in a fatality. It is considered potentially dangerous to humans (ISAF 2018).

The bronze whaler was listed as “Near Threatened” on the IUCN Red List in 2003. This assessment is based on the fact that it does not appear especially abundant anywhere. Instead, it appears sparsely distributed across small regional isolated populations around the world. The bronze whaler is locally common in some parts of its range; There have been population declines in New Zealand that have been attributed to overfishing (Duffy and Gordon 2003).

> Check the status of the bronze whaler shark at the IUCN website.

The IUCN is a global union of states, governmental agencies, and non-governmental organizations in a partnership that assesses the conservation status of species.

The bronze whaler shark has a worldwide distribution in warm temperate and subtropical waters in the Indo-Pacific, Atlantic, and Mediterranean (Compagno et al. 2005).

The bronze whaler shark commonly occupies a variety of habitats from shallow bays and estuaries to inshore and continental shelf areas. It has been found from the surf line to depths of up to 328 feet (100 m), but is believed to range deeper (Duffy and Gordon 2003).

Distinctive Features
The bronze whaler shark is a large classically shaped requiem with a pointed snout. It has characteristic narrowly triangular hook-shaped teeth. The upper teeth are sexually dimorphic, the males having proportionately longer and more hook shaped teeth than the females and juveniles. The eyes of this shark are circular and relatively large. Bronze whaler sharks have moderately large pectoral fins with narrowly rounded or pointed tips. The caudal fin has a bulge near the base of the front edge. This species lacks an interdorsal ridge (Compagno et al. 2005).

Coloration
The bronze whaler shark is bronzy grey to olive-grey in color on its dorsal surface and white on the ventral surface. This counter shading serves to camouflage the animal from predators or prey below. This species has dark markings on the edge of its fins and white or dusky tips. Bronze whaler sharks are often confused with blacktip sharks or spinner sharks because of their markings (Compagno et al. 2005).

Dentition
Juvenile bronze whaler sharks have teeth in the upper jaw that are finely serrated and have erect symmetrical cusps. Adult bronze whaler sharks on the other hand, have narrowly triangular finely serrated cusps in the center of the upper jaw, which become more oblique as they move out towards the corners of the mouth. The lower teeth are characterized by more oblique cusps and are finely serrated as well. Tooth counts range from 14 to 16 on either side of the upper jaw and 14 – 15 on either side if the lower jaw. Upper jaw teeth are sexually dimorphic in adults – see above

Food Habits
The diet of the bronze whaler shark consists of a variety of cephalopods including squid and octopus as well as sardines, mullet, and flatfish. During the winter months, large numbers of bronze whaler sharks follow the sardine shoals as they move along the coast of southern Natal in the “sardine run”. Adult bronze whalers are known to feed on other elasmobranchs such as stingrays and other sharks (Compagno et al. 2005, Duffy and Gordon 2003).

Reproduction
The bronze whaler is a placental vivipararous species, which means that its embryos are nourished via a placental connection to the mother and are born alive. Gestation is estimated to last 12 months and reproduction occurs biennially. According to the limited data available, pups are born from June to January and litters contain between 7 to 24 pups with an average of 15 and are approximately 60 cms TL at birth. The bronze whaler uses inshore bays as nursery areas (Duffy and Gordon 2003).

Parasites
Otodistomum veliporum is a type of fluke that has been found in the stomach and spiral valve of bronze whaler sharks in Brazil. Cathetocephalus australis is a tapeworm that can also be found in bronze whaler sharks from the southwestern Atlantic Ocean (Schmidt and Beveridge 1990).

Schmidt, G. D., & Beveridge, I. (1990). Cathetocephalus australis n. sp.(Cestoidea: Cathetocephalidae) from Australia, with a Proposal for Cathetocephalidea n. ord. The Journal of Parasitology, 337-339.