Today we review the biology of the great white shark, including various theories on its evolution and descent as a species, physiological aspects, as well as some unique characteristics of Great White anattomy, habitat, range, distribution, diet and the scavenging behaviour these sharks present.

Portrait of a perfect apex predator

Apex predators (also known as alpha or super predators) are animals that have no predators of their own, residing at the top of their respective food chain. As such, apex predators, have a crucial role in maintaining the health of their ecosystems. Sharks have roamed our planet’s oceans for morethan 400 million years, predating the dinosaurs by some 200 million years. Although they existed at the same time as the dinosaurs, sharks survived the mass extinctions our planet experienced.

Considering that the earliest hominids date back only a few million years, sharks have been around for a very long time. This ancient lineage does not, however, equate them to a primitive form of life. Sharks have constantly adapted and perfected their shapes and sensory capabilities over the millennia, and today present one of the most perfectly adapted creatures on our planet.

The Great White is a highly evolved animal, forming the pinnacle of marine predation and is one of the true apex predators of our oceans. Its long maturity cycle, its incredible array of senses, a blood circulation system able to retain heat to maximise its muscle energy, as well as the ability to selectively target its preferred prey, attest to an evolutionary marvel.

Shark are an ancient group of animals, and have remained virtually unchanged for the last 200 million years. The basic form of a shark consist of two dorsel fins, flexible jaws able to thrust forward during feeding and a powerful tail for propulsion. The retention of similat body shapes from prehistoric to modern sharks suggests that their morphological and anatomical characteristics make them one of the most successful species on this planet, perfectly adapted to their environment and therefor highly evolved. 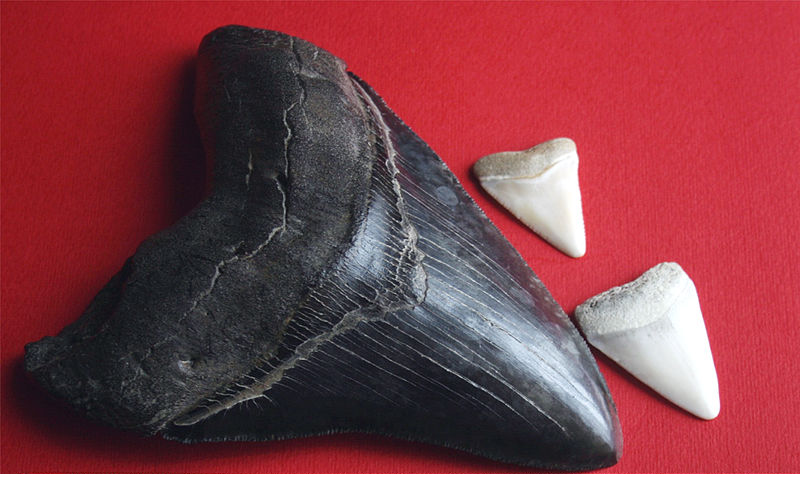 Above : Size comparison of a Great White Shark tooth and the fossilised tooth of a Megalodon Shark

The Great White shark was first described by Carolus Linnaeus (a Swedish botanist who established a general system for naming and classifying all living things) in 1758. He named the species Squalus Carcharias. Ichthyologist Andrew Smith later renamed the species Carcharodon Carharias, which is derived from the Greek karcharos (meaning ‘sharp’ or ‘sharpen’) and ‘odous‘, which refers to teeth. The species name Carcharias, also from the Greek, means ‘point’; in Australia the Great White is commonly known as the ‘white pointer’. Other names given to the Great White are White shark, blue pointer, white death, witdoodshaai (Afrikaans) and Weisshai (German).

The Great White is a member of the the order Lamniformes, which contains fifteen different species, of which the Lamnidae or Mackelel Shark sub-order includes five species: Great White, Longfin Mako, Shortfin Mako, Porbeagle Shark and the Mackerel Shark. 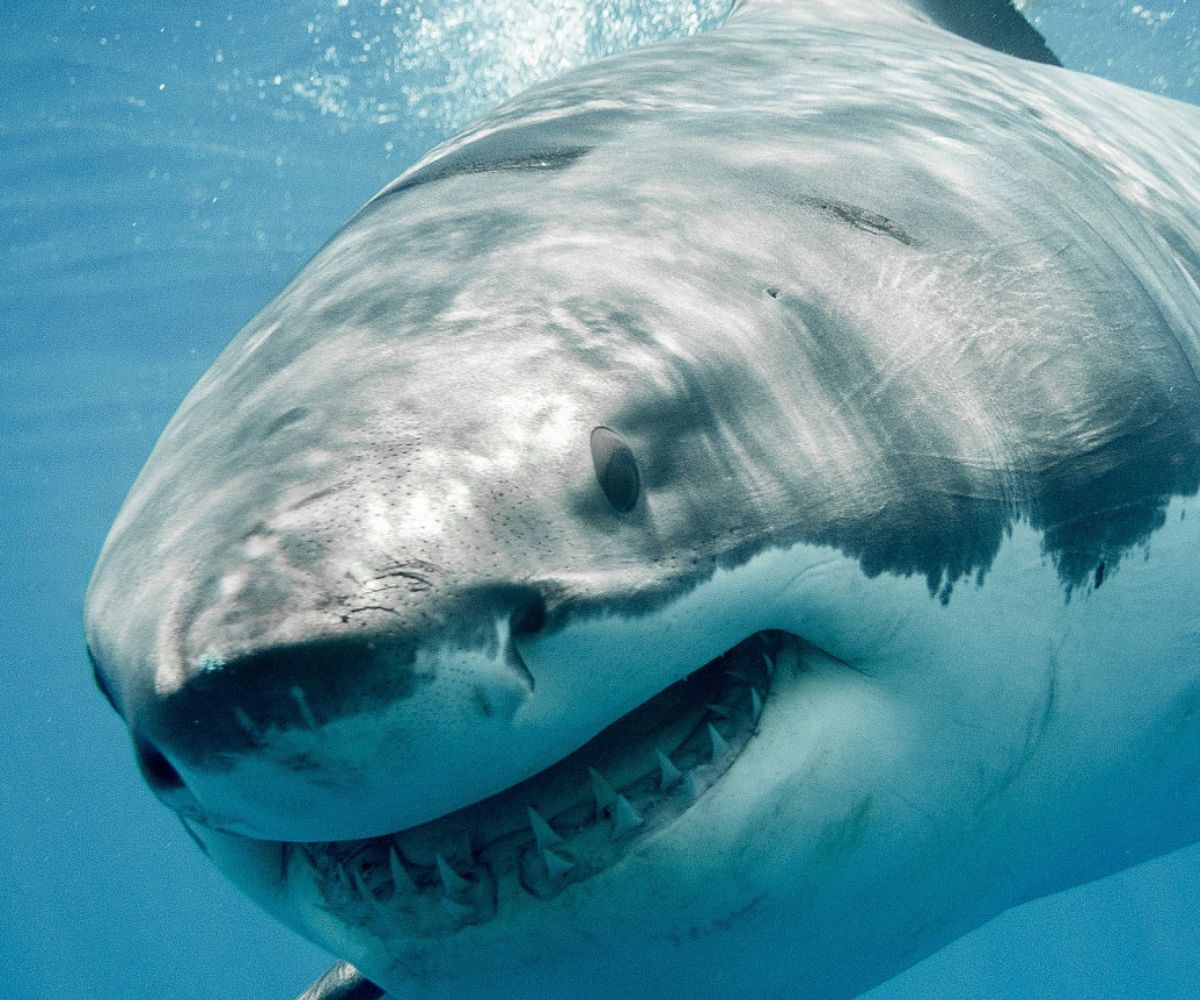 The members of the Lomnidae family are typically torpedo-shaped. Interestingly, they don’t have nictriting membranes – found in many other shark species – which protect the eye at the point of contact or during predation. Instead, they are able to roll their eyes completely back into their sockets, thereby offering a higher degree of protection than a nictitating membrane would. The Lamnidae typically also have jaws that extend well behind the eye, strong caudel keels and possess five relatively large gill slits for maximum oxygen absorption.

There are three conflicting theories on how Great White sharks evolved. One theory traces the Great White back to the massive and now extinct Megalodon Shark; another to the predecessor a Mako shark lookalike, Isurus hastiles; and a third suggests that the Great White evolved as a distinct species in parallel with the Magalodon and Isurus hastiles.

In the case of a Megalodon descent

The Great White – Megalodon descent theory is probably the best known. The Megalodon was the largest predatory shark that ever lived on earth. It was armed with fomidable teeth and jaws that could exceed 2m (6.5ft) in diameter. Some fossilised teeth ate larger than 20cm (8 inches) in length, which would have enabled Megalodon to hunt any animal in its aquatic realm.

Based on the fact that both Megalodon and the Great White have serrated teeth, some scientists have placed the two species into the same genus, namely, Carcharodon.

In the case of an Isurus Descent

Other scientists believe that the Megalodon was an evolutionary dead-end and that the Great White is a direct descendant of the long-extinct Isurus hastalis, a species that closely resembles the Mako shark. Again, the basis for this classification of origin lies in the shape of the teeth, which also resembles Isurus hastalis, but with weaker serrations, indicating a possible transitional form, making it possible that the Great White was a descendent of the Isurus hastalis lineage before it developed more pronounced tooth serration.

In the case for an independent yet parallel development

Considering that to date more than 1200 species of sharks, rays and chimeras have been recorded inhabiting our oceans, a seperate and independent lineage may be a worthy consideration given this diverse group of animals.

Whichever lineage the Great White descended from, one thing is certain; it has evolved into a truly remarkable macro predator that today remains at the apex of its evolutionary form.

Great Whites can be mostly found at the southern coast of South Africa and there are a few Shark Cage diving operators that can take you to see them up close in their natural environment. Kim ‘Sharklady’ Maclean from Sharklady Adventures has pioneerd Shark Cage diving in South Africa and are involved in a number of research and conservation programs to help educate people about these amazing sharks. When you have the pleasure to visit South Africa next, make sure to book a shark cage dive with Sharklady Adventure, and see these predators in their natural environment.